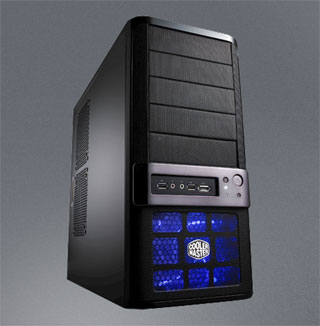 Computers of course, have been around for many years. They manufacture cases, power supplies and cooling solutions for a variety of users from the high-end enthusiast to the average Joe on the street wanting an inexpensive case. Their manufacturing facility in China is ISO 9001 certified, meaning that they have to adhere to rigorous quality standards in manufacture.

Cooler Master tends to make cases with a theme. Their high-end cases include the HAF (High Air Flow) case the CM Stacker NVIDIA Edition and the Cosmos series of cases which are designed from sports cars. Their Mid-Tower case series includes the Centurion, the Elite, the HAF 922 and the Gladiator 600 case being reviewed here today. Note that the mid-tower cases seem to have a Roman theme to them with the Centurion and Gladiator names in use on their cases.

There are two models of the Gladiator 600 case one with a side window and one without. The difference in part number is a K for the case without a window and a W for the case with the window. The case being reviewed today did not come with a window. There is a single color available which is Black. The case dimensions are normal for a Mid-Tower case.

Airflow is always important on a case and the Gladiator supports up to five fans. You can install up to four 140mm fans and a 120mm fan for maximum ventilation. Cable management is also important as the enthusiast wants to show off their new case but improper cable management can make a high-end system into mess as cables can get in the way or block airflow.

The Gladiator 600 is very user friendly with a Front I/O Panel, a CPU cooler retaining hole. The next feature is that the PSU fan can be facing up or down position. Long video cards like the GeForce GTX285 should fit with the motherboard tray being 280mm deep. This means that you can fit a 270mm long video card into the case. Cooler Master warns that CPU coolers taller than 6.5 inches (165mm) will not work. Video cards longer than 10.6″ will also not work in this case.

Cooler Master ships the Gladiator 600 case in a white box with pictures of the case features and short descriptions of the features on one side. The other side has the name of the case with a picture of the Gladiator 600 case prominent on the front. The Shipping Label along with the Part Number sticker is on the rear of the case.
Opening the box up, we find that Cooler Master has capped the top and bottom of the case with Styrofoam pieces. The case itself is inside a plastic bag. This is sufficient for most shipping as the case fits snugly inside the box. The bundle itself has a wide array of screws, stand-offs as you would expect from a case. Cooler Master goes the extra mile with 10 cable ties included for proper cable management. There is also a lock buckle to lock the case.

Cooler Master includes an external SATA port, two USB 2.0 ports, the Mic and Audio jacks for the Front Panel Audio, and the standard Power and Reset buttons. The only additional I/O many would like to see is a Firewire port, but the external SATA port makes up for that as that is more common than a Firewire port at this time. The Power button is colored the same as the brushed metal strip and the Reset button is a small button to the left of the Power button.

The left side of the case has two mesh windows right above where the CPU and GPUs would normally fit into the case. There is room for two 140mm fans on the mesh providing airflow over the CPU and or graphics cards. Mounting holes are also present for the 120mm fan if you want to install a 120mm fan instead. The right side of the case is a solid Black color with nothing besides the indentation for the handle.

The rear of the case has a spot for a 120mm fan next to the Rear I/O area. There are also holes for a 80mm and a 60mm fan if you want to use them. The PSU is on the bottom of the case, as is the fashion with modern case designs. There are seven PCI slots on the case, the usual number. There are plastic flip top covers for each PCI slot. The side panels are held in place by thumbscrews, which is an excellent touch as you don’t have to fumble with a screwdriver to remove the side panels.

Opening the case we found a very nice touch in that all the sides of the case are rounded. This protects your hands when operating inside the case as there are no sharp corners. The motherboard tray has a large hole in the center of where the CPU would normally be installed. This hole allows you to change out the back plate of the CPU without removing the motherboard from the case.

The top of the case has a 140mm fan to provide adequate ventilation from that position. The rear has the aforementioned 120mm fan mount. The fan is not included with the case. The bottom PSU area has a grill for the included dust filter. The case is deep enough for long PSUs to be mounted on the bottom. The upper right hand corner of the motherboard tray is where cables can be routed to the rear of the board.

The front of the case has a 140mm fan which is in front of the HDD rack. There is a metal grill on the front. The HDD rack is sideways to the case. This allows installation of longer video cards without problem as sometimes the video card will block a HDD space. To install a HDD simply plug in the rail and plug the HDD into the rack. There are also three holes for further cable management on the bottom of the case under the PCI slots and above the PSU.

Installing a HDD into the case is a simple matter. Simply mount the drive rails onto the HDD and slide the combination into the HDD rack. Note that there are no holes to mount the screws if you want to install a HDD without the rails, but this is tool-less and painless. There is a hole next to the HDD rack which allows you to move wires behind the board.

The bottom of the PSU area has a grill that mounts a dust-free filter included with the case bundle. To install it simply slide it into the slots. The PSU mounts with four screws on the rear of the case. After installing the DVD drive, attaching the wires and using the hole and cable ties for proper cable management, the system was ready to go.