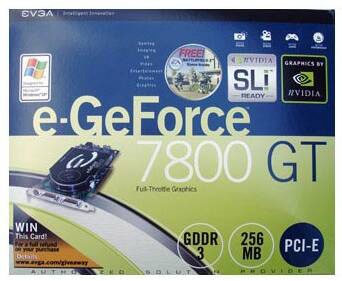 The past four months have been dominated by NVIDIA based video cards since the announcement, instant availability of the 7800GTX. ATI was months late with their next-generation “R5xx” series of cards meant to compete with the NVIDIA based chips. Recently, ATI announced its RADEON x1800, x1600, and x1300 series of cards. At the moment, only the x1800XL is available, with the cards available with a few outlets.

EVGA is a manufacturer of video cards, motherboards, and related accessories. Founded a few years ago, today, EVGA is one of the last bastions of graphics board makers exclusive to one company.

Other companies like ASUS, Abit, and others manufacture video cards based upon both ATI and NVIDIA cards. One reason I’ve recommended EVGA cards in the past has been their message boards filled with knowledgeable people and technical support second to none. Today, I’m reviewing two EVGA 7800GT COs in single and SLI mode.

The EVGA 7800GT CO is similar in appearance to the NVIDIA reference 7800GT card. The cooling fan on the card is a 29-fin radial fan blowing air out over the heat sink. 7800GT fans are the same as the 7800GTX’s fan. The heat sink covers the memory. EVGA names this card the e-Geforce 7800GT CO. CO stands for Copper, as the card has an all-Copper heatsink, allowing for cooler running as compared to other cards with different metal as the material. To some people’s way of thinking, CO is meant to stand for the symbol on the Periodic Table. The symbol for Copper is Cu on the Periodic Table.

All 7xxx series of cards are PCI Express native cards. Intel announced their 915/925 chipset last year, introducing the 3rd Generation Input Output interface, otherwise known as PCI Express to mainstream computers. The first NVIDIA cards were not designed to operate on the PCI Express bus, requiring a HSI (High Speed Interconnect) bridge chip to run. Later cards integrated the controller on the die, allowing the cards to work without the bridge chip. Length of the 7800GT card is about the same as a 6800GT of last year, making for easier fits into most ATX cases than the 7800GTX card, which often requires some rearrangement of drives, as the card reaches the cage of most cases.

Modern video cards require a lot of power to operate at full speed. PCI Express x16 provides up to 75W of power to the video card, more than 5x the power of AGP 8x. 7800GTs and 7800GTX cards require more power, forcing the manufacturers to include a 6-pin power cable to provide extra power. Input-Output ports on the 7800GT CO are typical of modern cards. EVGA includes two DVI-I connectors and a TV-Out connector, allowing for dual monitors to be utilized with NVIDIA’s nView utility. Most monitors sold today are flat-panel LCD monitors. With two DVI-I connectors, you can use two LCDs, two CRTs, or a CRT+LCD at the same time.

7800GT differs from the 7800GTX in having 20-pixel pipelines versus the 24 on the 7800GTX. EVGA decided to overclock their 7800GT CO to 470MHz, a healthy 70MHz clock over the standard 7800GT found in many models. It’s also a 40MHz overclock over the 7800GTX. It’ll be an interesting battle with 16 ROPs and 24-pixel pipelines versus 16 ROPs and 20-pixel pipelines. An ROP is an outputted pixel, as every clock, 16 pixels maximum are outputted. Pure pixel fillrate is becoming more and more irrelevant, as with over a 7.5 Gigapixel fillrate, the 7800GT CO should have plenty of horsepowers to run games at max resolution and settings.

One key feature of any video card released today the Pixel and Vertex Shader version it fully supports. Looking at the lineup of ATI and NVIDIA cards for the foreseeable future, virtually every card sold will support Pixel Shader 3.0 and Vertex Shader 3.0 standard. Key features of PS3.0 include nearly unlimited shader lengths and dynamic branching. Vertex Shader 3.0 includes support for Vertex Texture Fetch and Geometry instancing support. NVIDIA beefed up the shader core in G70 so that performance in the most commonly used shaders is increased. I’ve already covered most of the features in various other 7800GTX and GT reviews and won’t repeat them here.

The Bundle Support, and Setup:

Hardware-wise the card came with everything I expect from a video card today. Two DVI-I to D-Sub adapters are a welcome addition, allowing you to use dual monitors in every possible combination. The S-Video Out cable connects to your television, allowing you to play PC games on your television. eVGA also includes two Case Stickers to customize your case showing off EVGA’s logo. The Installation Guide goes over setup step by step, differing modes for dual monitors, basic troubleshooting, and quick fixes for common problems, support, warranty, and Step-Up information. Software-wise EVGA includes a Ulead Movie Factory trial offer (30 days) and the drivers. It’s rather disappointing that EVGA didn’t include full versions of the software.

EVGA really steps up to the plate in the support category in many ways. First, is their Lifetime Warranty. While companies like ATI have lowered their Warranty to only 1 year, EVGA has a Lifetime Warranty for all video cards purchased after June 22nd. In EVGA’s case, a Lifetime Warranty is for the lifetime of any retail Video Card or Mainboard ending with the letters AX, DX, or FX and there is no physical damage to the PCB, GPU/chipset and or components. EVGA says that overclocking will not automatically void the warranty as long as no damage is done to the components.

The second unique thing about EVGA video cards is their Step-Up program. It’s the only program of its kind in the video card market today. Buy any retail EVGA card from EVGA or from an approved reseller, retailer, e-teller or distributor of EVGA products, and you get the opportunity to purchase a new, faster, card within 90 days for the difference between what you paid for the card and the retail price of the new card. Other companies have limited trade-in programs (like ATI’s $50 off for the card, but EVGA is the only company giving you full credit for the price you paid for the original card.

EVGA has another special that might interest you as the purchaser. From now until October 31st, you can get $25 cashback from EVGA AND 25 EVGA Bucks, good for purchasing products from EVGA’s website. With the price of the card hovering around $369 online, plus the Call Of Duty bundle, this makes the EVGA 7800GT the best buy you can buy for any video card released today.

EVGA was kind enough to send 2 cards for a review of them in SLI mode. NVIDIA has released new beta Forceware drivers, 81.84 which I chose to use. Normally, I don’t use the beta, Non-WHQL drivers. In this case, the drivers were used for a couple of reasons. First, they fixed an annoying bug with anisotropic filtering. Second, they introduced some new features for SLIing NVIDIA based video cards. EVGA has a built-in tool to change resolutions and image quality settings called ResChanger

SLI is easy to setup. After changing the SLI card and inserting the video cards into differing PCI Express x16 slots on the ABIT NI8-SLI motherboard, I attached power cables to the 7800GTs and inserted the SLI Bridge in between the cards attached to the “Golden Finger” connector for SLI. After installing the drivers the system detected the system as an SLI-Capable system.

NVIDIA just announced a new promotion with its partners including EVGA. Every 7800GT card sold from EVGA including the 7800GT CO I’m reviewing here will be bundled with Call Of Duty 2 from Activision. The game isn’t even released yet and will be released on October 25th. I enjoyed Call Of Duty when it was released a couple of years ago and the demo that was released a month ago or so.

Valve has recently updated its Steam Engine to invalidate all of the old-time demos in HL2. This is the second time they have changed the scripts, forcing me to change the benchmark we use, making the new benchmarks incomparable with my old reviews. Otherwise, our test platform is the same as we’ve used for all video card reviews of the last year.

Land Of The Dead is based upon the horror movie of the same name. In this movie, you are fighting off zombies that have taken over the Earth. Playing this game on a 7800GT or dual 7800GTs is a lot of fun as the video cards are not the bottleneck. I was able to fully play the demo at 1280×1024 with 8XS AA and 16x AF with the 2 7800GTs in operation.

Serious Sam 2 is the sequel to one of 1997’s best games, Serious Sam. Today, Croteam released the second demo for the soon-to-be-released game. Maximum settings with AA and AF are fully playable on the 7800GT in SLI mode. One thing about Croteam and its games is they tend to have forward-looking features including support for Shader Model 3.0 hardware and more.

When I think of classic RTS (Real-Time Strategy) games I think of two games, Command And Conquer and Age Of Empires. As an aficionado of RTS games over the years, I’ve enjoyed games like AOE2 and Act of War. Microsoft recently announced the Age of Empires 3 and released it today. The graphics engine in the game really has taken a step forward with pixel shaders used for water effects. It runs well on most modern video cards and has no issues on the 7800GT.

EVGA really goes all-out in support of their video cards, and that is a good thing. Lifetime Warranties that actually last, a Step-Up program that’s unique in the industry, 24-7 Toll-Free Technical Support, these are trademarks of a company that cares about its customers. For those reasons, I can easily recommend an EVGA video card. The 7800GT CO adds a factory overclocked core and a copper heatsink to the feature list.

The negatives of this card are few. With the new edition of Call Of Duty 2 with all EVGA 7800GTs, this card is great for gamers that are looking to buy a new video card. Trial versions of software do not cut it with me and I fault EVGA a little for including the Ulead bundle with a 30-day trial of it.

When compared to the competition, the 7800GT is faster in many respects than the ATI offering at this price point, the x1800XL. Features like HDR and FSAA operating together, superior Anisotropic Filtering and AVIVO, differentiate the ATI card from NVIDIA’s card. I never recommend a card I’ve never had experience with, and I won’t start now.

We had a special visitor to our test labs, Wade Shelley of EVGA. He came over last night and we had a nice chat about EVGA, the business, and shooting the breeze. It’s always nice to put a face to people I chat or talk with over the phone, and it was a pleasure talking to Wade. If you ever have wanted to see what our test area looks like here’s a picture of Wade sitting next to one of the 7800GT cards.

The manufacturer’s suggested retail price of the EVGA 7800GT is $469. This pricing is in line with the competition, who is selling the x1800XL at $450. However, you can purchase this game online from stores like Monarch Computers which has this card for a price of $369. This price includes the free Call Of Duty 2 game, and the second to none support of EVGA.